The year is 1982. Music history is about to be created. Dag Ingebrigtsen is forming a new band. Diesel Dahl joined in and after a while, Steinar Eikum and his bass is a part of it.

Ingebrigtsen conducts several auditions with several different guitarists before he finds Ronni Le Tekrø. Now it is summer, more precisely 2nd of June 1982, and TNT has now it’s official birthday. The album was released in 1983 probably in the end of February when the album hit the VG-lista (VG, National newspaper with the official music chart list every week) in the beginning of March, and got lot of attention because it was in Norwegian. The album is a classic among fans and critics in the music- and culture-media. The album has treasures like “USA”, “Eddie” and “Harley-Davidson”.

TNT decided to sing in English for the sequel: “Knights Of the New Thunder”. Steinar Eikum chose to quit the band, and Morten Skaget, under the artist name Morty Black, became the new bass player. Dag Ingebrigtsen had of course the original vocal, but he decided to leave the band for the sake of his family and to pursue other projects.

The history says that Gary Barden, an English singer and songwriter (mostly known for his work with the Michael Schenker Group) was on his way out the door with his flight-ticket in one hand and the suitcase in the other, when Diesel Dahl and TNT cancelled the trip. 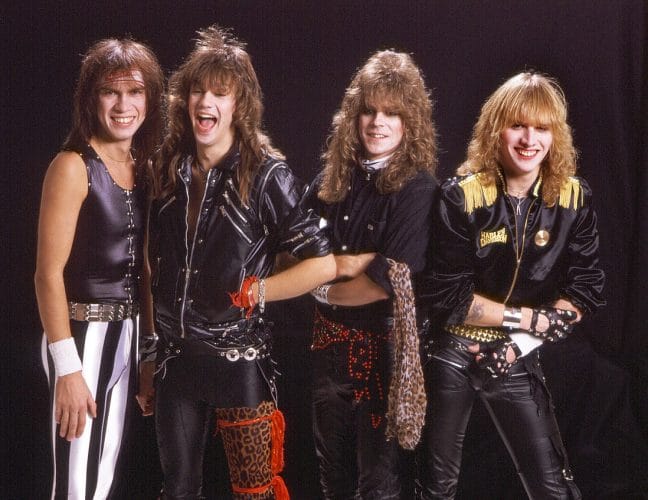 Ronni Le Tekrø has said that “We heard an original sounding voice from the heavens and invited him to Norway to join the band”. It was the American singer Tony Harnell who took over the microphone in TNT in May 1984. Harnell himself claims that he until this day, does not know how the demo reached TNT.

Tony Harnell listened to TNT and expressed that this was exactly the kind of music he wanted to be a part of and work with at this moment. It was Mike Varney (an American musician, producer and impresario) who gave the TNT tape to Tony Harnell. The record “Knight of the New Thunder” was released in 1984. The first album hit the music stores in September and was received with resistance and controversy because of the cover. It was withdrawn, got a new cover and the date of release was officially put to 2nd of November 1984.

TNT got a hit with the video of “Seven Seas”. The song is a classic and is considered to be close to a “national anthem” among rock fans.

“Tell No Tales”, TNT’s third release, came in 1987. It contained the hit singles “Everyone’s A Star” and “10.000 Lovers (In One)”. “Tell No Tales” was the huge breakthrough, especially in USA where it was well received and among other achievements reached the official Top 100-list (Billboard).

Tuesday June 23rd TNT played at the iconic Marquee Club in London. A scene who throughout many decades was one of the most important place for the development of popular music from Europe. This was also the place to gather for several of the most important musicians, artists and personalities in the music history, they are still going strong today, making music.

1987 was the year when TNT won the price Spellemannsprisen in the genre Rock with this album. The video of “10.000 Lovers (In One)” was a huge success. TNT toured extensively, both in USA and in Europe.

Diesel Dahl chose to leave TNT early in 1988 to compose his own music and create a new band. Morten Skogstad, under the artist name Kenneth Odiin, became the new drummer of TNT, but left after a short time, after the release of “Intuition” was released in 1989. This album was more of a pop- characterized album, but at the same time is this the favorite among many fans!

In this period there was some discontent about the development of the band – and TNT got an involuntary break. 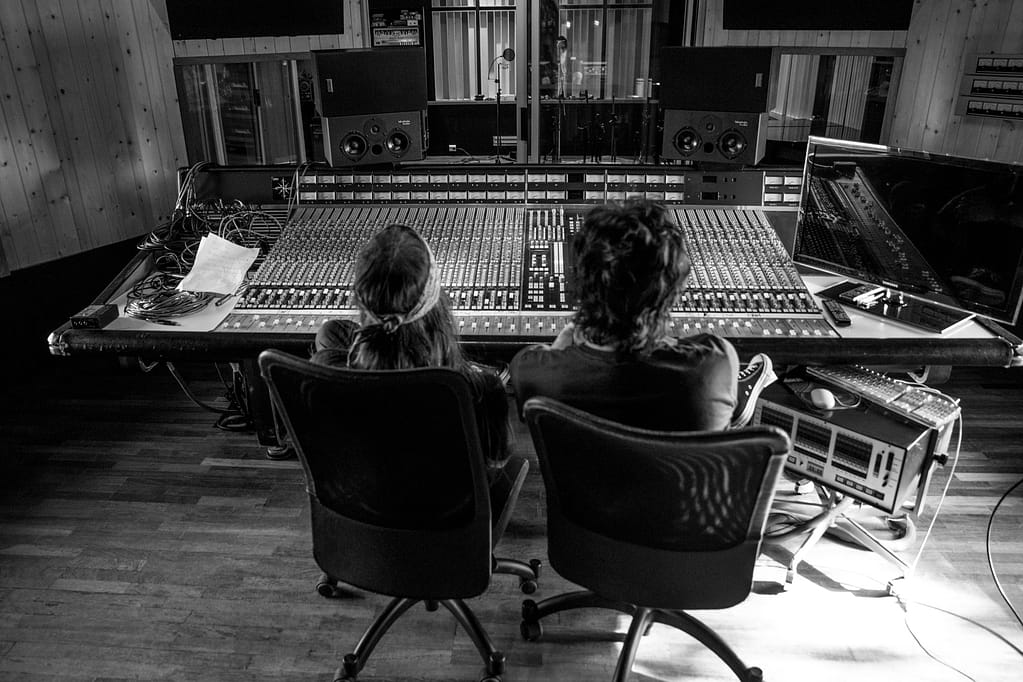 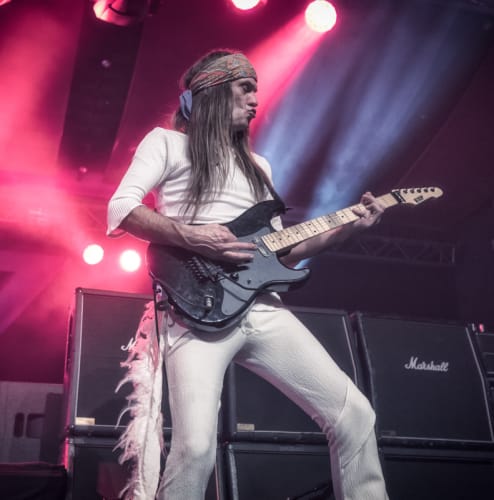 New releases came in 1992 – “Realized Fantasies” and “Three Nights in Tokyo”. Now the American musician John Macaluso was the new drummer. Macaluso was only part of one studio album with TNT before he decided to leave. After yet another long break for TNT, the collection album “Til Next Time – The Best of TNT” was released in 1996.

“Firefly” – with Frode Lamøy by the drums and Dag Stokke now permanent by the keyboard – from 1997 was no huge success for TNT, but there are many fans all over the world who mean that this TNT album is highly underestimated and undeservedly overlooked. There are many strong songs like «Angels Ride», «Month of Sundays» and «Soldier of The Light». And we shall not forget the excellent ballad “Daisy Jane”. “Firefly was in USA actually shortened down when it was settled that songs like “Angels Ride” and “Heaven’s Gone” was labeled as sacrilege (!)

Reaching 1999, TNT was ready with the album “Transistor”. In a way the song material came as a surprise for the fans with its more experimental sound. There was not much happening around TNT at this moment, the band was no longer doing concerts. The members of TNT chose to work on other projects and co-ops in the musicscene.

Early 2000 the time was right for the fans to finally get their “diesel-locomotive” back! Diesel Dahl was again behind the drums at the collection album “The Big Bang – The Essential Collection” in 2003. An EP with the title “Taste” was released the same year, but only in Japan. “Taste” is a popular collector’s item for many fans outside of Japan. This also goes for other releases since TNT is notorious (!) when it comes to bonus-tracks at their releases in Japan.

“My Religion” was released in 2004. The review could tell that this record has a nice balance between vintage TNT (“Tell No Tales”) and a clear modernization, a contemporary influence, which the audience appreciated. Ronni Le Tekrø’s riff at “She Needs Me” is without a doubt very popular among instrumentalists. Again, TNT had a ballade becoming a classic, of course “Perfectly.” The title song “My Religion” is always a crowd-pleaser!

Morten “Morty Black” Skaget left TNT after a long tour in 2004. Sid Ringsby became the stand-in until Victor Borge took over in 2005. The same year TNT released the record “All The Way To The Sun”, where Sid Ringsby contributed on bass.

In 2006, Tony Harnell leftTNT, both caused by personal and professional reasons. He made it clear in his statements that this time the decision was final. A CD/DVD-release with the title “Live in Madrid” was released in the autumn of 2006. Harnell did one last concert at Polar Rock Festival, before he withdrew. Until then TNT had been touring with a new singer: Tony Mills. The two Tony’s sang “Harley-Davidson” together, a way of saying goodbye to the fans, and at the same time “passing on the microphone”.

The release of “My Religion” (2004) gave an experience of TNT returning to some of the “glam-style” from previous days. “All The Way To The Sun” (2005) was close to the same sound. Later came “The New Territory” (2007) and “Atlantis” (2008) with Tony Mills on vocal. The release had a mixed reception and created controversy among the fans. The album is influenced by The Beatles and Queen. Diesel Dahl has said that the record “Engine” (2010) was an attempt to recapture the old TNT-sound.

TNT released their 12th studio album in 2010 with the title “A Farewell To Arms” – “Engine” is the title of this release in Norway – also with Tony Mills on vocal.

27th of April 2011, musician and keyboard player Dag Stokke died. He had been touring with TNT since April 1987 and participated at every album from “Realized Fantasies” in 1992 to “Engine” 2010.

The concert of TNT at Sala Heineken in Madrid 17th off September 2011 was filmed but has never been released on DVD.

2nd of June 2012 TNT celebrated their 30-years anniversary with a gala performance concert at Clarion Hotel in Trondheim. The band played together with TSO – Trondheim Symphony Orchestra. Dag Ingebrigtsen and Tony Harnell were guest singers at “Seven Seas”, it was well received by a cheering audience.

Victor Borge left TNT December 2012 to work on his own projects. It was announced that Sid Ringsby was back. Victor Borge returned to TNT in 2013 and joined the band until 2015.

When Tony Mills chose to quit TNT late summer 2013, Tony Harnell took over the microphone yet again. In January 2015 Tony Harnell left TNT, but the break didn’t last for long. He was back again in May 2016. In conjunction with the 30th anniversary of the album “Tell No Tales”, TNT went on tour. Diesel Dahl, Ronni Le Tekrø, Tony Harnell and the new bass player Ove Husemoen.

The news of a new TNT-album was ahead created a huge expectation and joy among the fans. Then came the message that TNT and Tony Harnell had agreed to split up again in October 2017.

In the weeks ahead until early winter 2017 it was still not revealed who would be the new singer of TNT. The band itself did their part to create expectations about the matter. Many fans participated in the discussion at the Facebook page of TNT.

In Oslo Spektrum 22nd of November 2017, TNT were OA for the legendary band Scorpions and the presentation promised was finally revealed: Baol Bardot Bulsara was the new voice of TNT!

June 8th 2018 TNT released their album number 13 – aptly named “XIII”. TNT had a handful of concerts around in Norway the that year. Rockefeller in Oslo and Union Scene in Drammen in January 2018 was within a short time of the presentation of Baol Bardot Bulsara. There was no doubt that the audience whished Bulsara welcome and joined in with enthusiasm at their favorite songs – also those of recent date: “We`re Gonna Make It”, “Can`t Breathe Anymore” and “Fair Warning”.

TNT was also one of the headliners at Ifjordfestivalen in Mo I Rana in June the same year. Although the summer weather was not a team player, TNT made sure to keep the heat and volume up as usual.

Another solid highlight in 2018 was the concert -that immediately was re-named by the crowd as the Double-Birthday-Celebration- at Retro Bar and Scene at Raufoss. A relatively small venue totally crowded with TNT fans coming from everywhere! A music party where the crowd could get close to their favorites.

In Hamar Kulturhus 28th of September, the first concert was held after TNT was inducted to Rockheim Hall Of Fame 16th of September 2019! A celebration and a concert to remember that also included a tribute to late Tony Mills. An instrumental version of “God Natt, Marie”, performed with a tremendous sensibility by Ronni Le Tekrø. This touching tribute is to be found at YouTube, and everyone present were experiencing a true golden moment!

This evening there was a “get to know him better”-interview with Baol Bardot Bulsara. A smiling and relaxed singer shared happenings, experiences and described his ideas and thoughts about music, he also shared some gold nuggets about his life in music, and of course about TNT and touring in the future.

Birger Teigen is the man behind the video and yours truly did her best to find the right questions.

April 2020, the music- and culture-world is also experiencing the State of Emergency that truly has put a lockdown on events of all kind. This has severe consequences for musicians and everyone who, at all times, is a part of the music “on the road”, and of course the crew in front of -and behind the stage. Music fans all over the world are waiting patiently until the day we all get the chance to experience TNT and music together again at its best – live!!